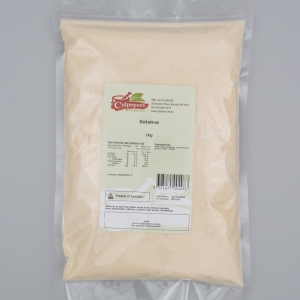 It is commonly used as a gelling agent in foods. Used in gummy confectionery, marshmallows, gelatine desserts, some ice creams, dips and yoghurts. Important ingredient in the famous Italian dessert : Panna Cotta.

It may also help to improve digestion and cognitive abilities.

Gelatine is from the Latin word gelatos meaning stiff or frozen. The USA Army signal corps operated a "Air Ship" named Gelatine in the early 1900's. Collagen comes from the Greek word for glue. Makes you think.

Most people don't consume enough gelatin nowadays because the part of the animal where we can find gelatin (skin, tendons, marrow) are no longer consume or at least not as much as it was.