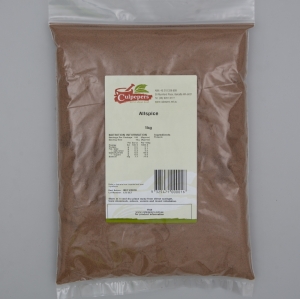 Used in sausage making to add flavour. It is the main ingredient in BBQ sauce and pasta sauce.

Also used when cooking with fruits such as baked apples, banana etc and other dessert dishes. Allspice can also be used as a substitute for cloves in sweet meals.

Great in chutneys and relishes. Used to season chicken dishes.

The Pimento plant has volatile oils that contain eugenol, a weak antimicrobial agent.

Pimento is a nightshade

Oddly, the name Allspice was coined as early as 1621 by the English traders. They thought it to be a combination of three ground spices, Cinnamon, Nutmeg and Cloves and so named it Allspice as they were the common spices available of the day.

Allspice is often called Pimento, not to be confused with the capsicum pepper Pimiento, which is a vegetable, not a spice.

During the 17th century, Allspice was considered a preservative for meat or fish. That is certainly the reason why the Mayans employed it in the embalming process. On the other hand, the Aztecs used this spice with vanilla in their chocolate drink.