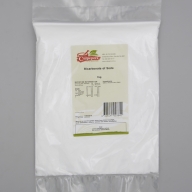 Baking soda causes expansion of the batter and grain in pancakes, quick breads, soda bread and other baked or fried foods. Often used as a leavening agent.

Sodium Bicarbonate when mixed with water can be used as an Antacid to treat acid indigestion and heartburn.

It may help to fight colds and the flu. It may relieve the effects of sunburn or even help to whiten teeth.

Dr Austin Church and John Dwight began to manufacture and sell the bicarbonate of sodium we know today but it was first discovered by the French chemist Nicolas Leblanc in 1791.

Since 2000, bicarbonate of sodium is used by kids to mummify things such as hot dogs for science projects.

Bicarbonate of soda is also used as a deodorant, a facial and body exfoliant, or even as laundry detergent. It is also found in toothpaste, cat litter, and is also the main ingredient of the fire extinguishers.

At 149 degrees Celsius, the bicarbonate of sodium starts to break down into sodium carbonate, water and carbon dioxide.

Culpepers' Bicarbonate of Soda comes from the USA!