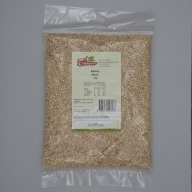 It is commonly used in soups, stews and in barley bread. Also delicious in salads and pilafs.

It has a nutlike flavour and chewy texture such as pasta.

Barley water gives nourishment when suffering from a fever or upset stomach. Being Rich in Vitamin B and E it is recommended for people that are on the mend.

It may also be beneficial to sufferers of asthma and bronchitis.

Important uses include its use as animal fodder.
It is source of fermentable material for beer production (and some others alcoholic beverages).

The "Barley House" became to be known as "The Barn" and is where the term "Barn" came from.

It is originated in Ethiopia ans Southeast Asia, where it has been cultivated for more than 10 000 years.It was used as a food by the ancient civilizations.  The first recipe for Barley wine dates back to 2800 BCE in Babylonia.

In ancient time, Barley water has been used for various medicinal purposes. Greek Athletes used to eat Barley because it was thought they could help them win marathon, while the Romans were giving some to their Gladiators for the same reason. After that, the gladiators were known as hordearii meaning "eaters of barley".

In ancient Asia, it was a symbol of virility because the heads of barely are heavy and contain numerous seeds.