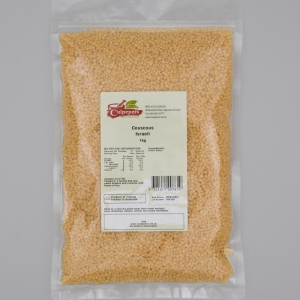 Cook the couscous in boiling water or in water that has been mixed with Culpepers' chicken, beef, vegetable or mushroom stock powder. Serve with prepared meat and vegetable.

Couscous has less kilojoules than rice.

Originally called Ben-Gurion rice after Israels first Prime minister whom suggested the idea to the Osem food company in 1953.

It later became known as Ptitim but some people know it as Jerusalem Couscous.