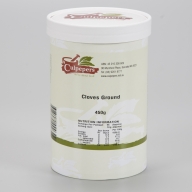 Used to add flavour to meat, seafood dishes, curry, meat marinades and cooked fruit desserts such as apples, pears and rhubarb. It has a pungent aroma and a sweet and spicy flavour.

Cloves may be used as a carminative or mild pain blocker.

Cloves were found to have a natural antiseptic and anesthetic effect. Apparently, the clove oil extracted by steam distillation can also gave a quick relief from toothache.

Cloves was once the most valuable trading commodity in the world surpassing value of trade in gems and precious metals.

It is the reason the Dutch colonized Indonesia and set up the Dutch East India Company. It was the first company in the world to offer tradable shares.

Ground cloves stems are mixed with tobacco to make Indonesian "kretek" cigarettes, that gives them a distinctive aroma.

During the plague, people used to make pomanders with cloves in order to sweeten the air.