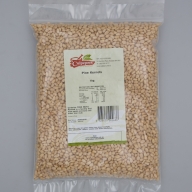 Pan fried or lightly roasted, they are commonly used in salads and in savoury dishes and in Pesto's. Used in chocolates, bread products, and is the key ingredient in the popular Italian Pignoli Cookies.
A "basil pesto" has 1 part pine kernels, 1 part parmesan cheese and 6 parts basil. Mix well. Then add garlic, olive oil and salt and pepper. Then blend. Store at 4 C until required.

Has 30% protein and is a great source of Fibre.

It used to used as a restorative after a long illness. It may reduce a fever in the bladder and urine.

It may help to prevent and treat obesity and aiding with blood pressure.

During the Egyptian time, people used to give them for some illness such as coughing or chest problems.

Turpentine comes from the distillation of pine leaves and pine tree bark.

Pine kernels are sold by the number of kernels per pound and graded by the appearance of blemishes and chips.

They have been cultivated for 10 000 years. Pine nut are mentioned in the ancient Greek history and was eaten by Roman soldiers as a "campaign food". In Europe and India, pine nuts were popular dating back  to the Paleolithic era.

A philosopher and scholar from Persia used to recommend to eat them because he thought it was an aphrodisiac.