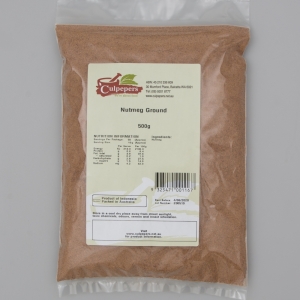 Ground nutmeg is often used as a spice for soups and other savoury dishes. It can be added to rice pudding, cookies or cakes, or sprinkled over milkshakes. Delicious with potatoes and all vegetables such as spinach.It is often a component of various spice blends.

It has a sweet and strong-tasting flavour.

Nutmeg is steeped in folklore but has no medical value today.

In the Caribbean, nutmeg is often used in drinks such as the Bushwaker, Painkiller and the Barbados rum punch. Typically it is just sprinkled on the top of the drink.

In Scotland, Nutmeg is an essential ingredient in Haggis. It was introduced into the European diet about the late 7th Century.
The Banda Islands in Indonesia was once the world's only known source of Nutmeg! Arab traders had been trading in Nutmeg for over a thousand years before the Europeans could locate the islands.

During the 17th century, the death penalty was imposed on anyone cultivating or selling the spice anywhere except the Spice Islands.

Nutmeg fruit looks like a nectarine but a bit more yellow. Mace is the aril of the fruit while nutmeg is the seed.

Nutmeg trees are growing in tropical regions. Local people use the flesh to make pickles.