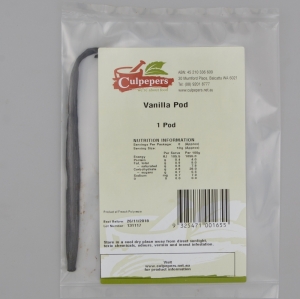 It is a major flavour in ice creams and complements chocolate, dessert, custard, caramel and coffee flavours. Also used in cakes and biscuits.

Vanilla is also starting to be used in savoury cooking such as as recipe with chicken.

It is possibly a nerve stimulant and an aphrodisiac.

Overexposure to Vanilla can produce headache, lassitude and allergic reactions. Workers in Vanilla fields often suffer from the side effect called "Vanillism".

Vanilla is native Southeast of Mexico and Central America. No one knows when the Aztecs started using Vanilla. At this time, Aztec were having a drink of chocolate and Vanilla.

Each Vanilla flower must be hand-pollinated within 12 hours of opening. Edmun Albius, who was a 12 year old slave living on the island of Reunion, discovered that by using a small brush that he could pollinate the flower

The cosmetic industry uses vanilla to make some perfumes.

Imitation Vanilla doesn't measure up on the flavour.

Vanilla was used to scent tobacco.

Vanilla is a member of the largest family of flowering plants, named orchid genus. It is composed of 20000 different species and 100 varieties of Vanilla.