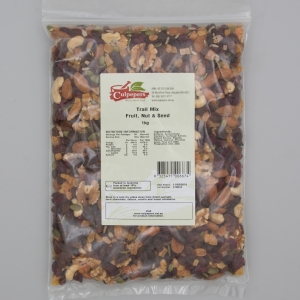 It was developed as a food to take on a journey such as a hike, cycle journey or for supplementary foods during high energy demands.

The energy content gives you a boost, but see the individual components for more specific information.

Some believe that the first to combine dried fruits, nuts and seeds into an eatable snack as a trail mix were two Californian Surfers in 1968. Others support that the combination was first described by Horace Kephart in a camping guide that he wrote in the 1910's.

It is also known as GRANOLA or as GORP (Good old raisins and peanuts.

Some people add chocolate buttons to the mix but these don't react well to heat and are therefore less shelf stable.