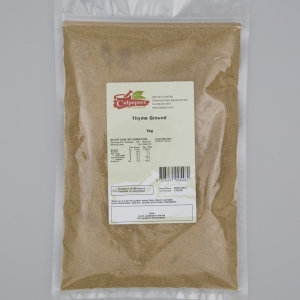 Often used in chowders, sauces, tomato dishes, pickled beets and is used in stuffing mixes. Can be added in many dishes containing meat or in casseroles. It complements pate's, terrines and beef sausages.

This spice is used in Bouquet garni.

Claims that it can be used to treat coughs and clear congestion. It is also said to dispel melancholy and nightmares.

The Egyptians and the Greeks used it for its antiseptic properties. It may be expectorant.

Thyme has been in use for over 5,000 years and there as many as 400 different species.

"Thyme" derives from the Greek Thymon meaning "to fumigate". According to others interpretations, it could also mean "courage" or "sacrifice".