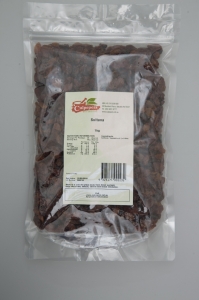 Used in mince fruit, fruit cakes, cereals, bread products, desserts. Can be added to oatmeal, chutneys or any baked goods.

Sultanas and raisins are high in certain antioxidants, but have a lower vitamin C content than fresh grapes and are low in sodium.

They may improve blood circulation.

They may be a good source of dietary Iron.

Sultana juice was once used in a fraud case where the perpetrators tried to pass it of as Chardonnay.

Most Sultanas come from the Thompson seedless grape. named after William Thompson, a viniculturalist in California USA. Sultanas are originally used to make wine.

The wife of a Sultan is known as a Sultana.