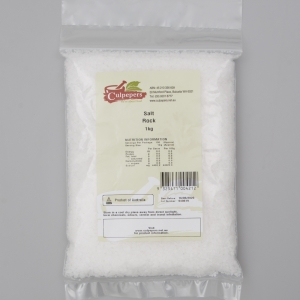 Mostly, rock salt ends up in a salt grinder and is a fancy way of having salt on the dining table. Some believe it tastes superior to table salt.

The particle size is about 3mm. It has no flowing agent.

It is also known as bubble salt due to its shape.

Salt Rock is the name of a small town on the dolphin coast of KwaZulu-Natal in South Africa. There is also a Salt Rock in West Virginia USA.

After aviation fuel is purified, salt is mixed with it to remove all traces of water before it can be used.

In old Japanese theaters, people used to sprinkle salt on the stage before a performance. They thought it would prevent evil spirit from casting a spell on the actors.

Salt may remove stains on clothes.