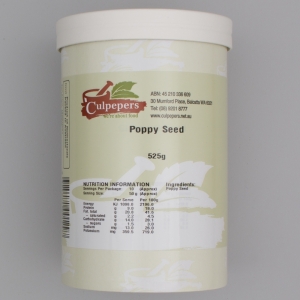 Mostly used on bread products as a topping. Also used in cakes and muffins and savoury biscuits. Goes well with orange and lemon flavours. Try it in a pasta dish! It can be sprinkled over bread, toasts or seafood.

Poppy seeds have nutty taste and a crunchy texture.

Poppy seeds are a potential source of anti-cancer drugs.

It is high in fibre and also contains iron, copper, calcium and magnesium.

Poppies are used for its medical properties such as anti-inflammatory and they might help digestion or red blood cells production.

Some medication contains it such as solutions for eczema or dandruff treatment.

It was mentioned in the early accounts of the Greek and the Romans. They started to consume it about 3000 years ago.

As Poppy seeds can cause a false positive in drug tests, it is advised in Indian Airports not to carry such items into other countries. Persons doing so have suffered imprisonment and punishment.

For the Egyptians, poppies symbolised rebirth because of its ability to be "reborn" after the harvest season. It was then also known as a symbol of remembrance for war veterans.