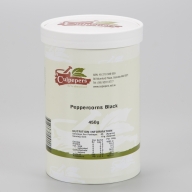 When served from a pepper mill, they'll add ambience to the fine dining experience. Offer Culpepers pepper to you diners at the table just after serving their meal.

Extracts from pepper have been found to have antioxidant properties and anti carcinogenic properties?

It is a native plant of Indonesia but flourishes in South West India and Vietnam. Black peppercorns are present in the Sanskrit writings which are dating back to 1000 before current era.

Ancient Roman traders thought that they were the seeds of the chilli pepper so they gave them a similar name. The name "pepper' remains today.

Black peppercorns get their colour during the drying process out in the sun for several days. There is an another method which consists in plunging the peppercorns into boiling water for a short period, and then putting them in the sun for only few hours (2-3h).