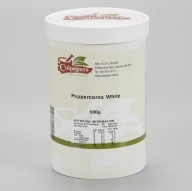 Mostly used in Pepper mills as they add to the experience of fine dining.

The blend Quatre e'pices (Four spices) is composed with white pepper, cloves, nutmeg and ginger, and is used in French cuisine.

Extracts from Pepper have been found to have antioxidant properties and anti-carcinogenic effects.

Brazil is planning to become a major grower and producer of Peppercorns. This should assist with keeping prices stable.

In the 1st century, people used to think that white pepper was produced by an other plant than black pepper.

White peppercorns are produced by removing the enzyme containing pericarp from the fruits. there is two methods: soaking or macerating.