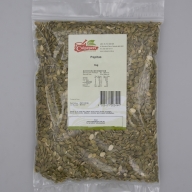 Used as a topping in bread products and is used in baking generally and even on pizzas. Delicious on top of salads, in sauteed vegetables or even in burgers. Is also used as a snack food.

The seeds are also a good source of protein, iron, zinc, manganese, phosphorus, copper and potassium.

Ground seeds mixed in water is effective against tape worms.

The seeds contain anti tumour properties and may be suitable in the treatment of an enlarged prostate.

They are very popular in Mexico and other Latin American countries. Often they are typically salted and spiced up after roasting.

China produce more pumpkins and so pepitas than any other countries.