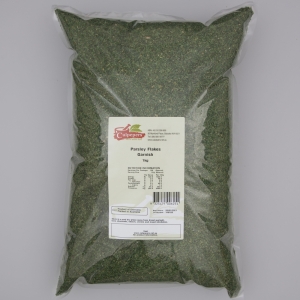 Bright green parsley is used were the colour is significant. It is generally more expensive than standard dried parsley. Mostly used as a garnish on a omelet.

Great sprinkled onto soup for flavour and decoration.

It takes 12 kilos of fresh parsley to produce 1 kilo of dried parsley.

During the 2nd century, Romans used it as a breath freshener.

The Greeks did not use Parsley in cooking because they thought it was a symbol of death ad was used as a funeral herb. In mythology, parsley was believed to have sprung from the blood of a Greek hero, Archemoros, the forerunner of death.