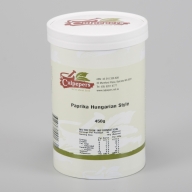 Paprika is frequently sprinkled on foods as a garnish, but the flavour is more effectively produced by heating it gently in oil. Paprika is used to add colour or flavour to savoury dishes. It is also added to the Hungarian goulash.

Unusually high in Vitamin C. Also high in Antioxidants. they may have anti carcinogenic properties.

Paprika is a Hungarian word. The brighter the red colour the milder the flavour.
Sweet Paprika is produced from the flesh of the fruit after the seeds have been removed!
The term "style" in the name indicates that in Hungarian cooking, a bright red paprika is preferred.
Paprika has been used in cooking for nearly 500 years!

Traditionally, Hungarian paprika was made by piling the paprika pods in sheltered position in the windows of houses or by stringing together large garlands of the fruits, and then hanging them on fences. When the fruit was dried, it was then ground into a powder.