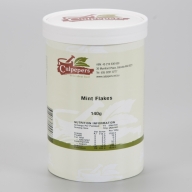 Mint is used in numerous applications. As a herbal tea. Add to peas. Mixed in with beverages. In gum and confectionery and in chocolate. In ice cream. Mixed with milk. Also used to make a sauce to have with lamb. Delicious with savoury dishes such as cucumber soups, or with chicken and pork tagines.

It is also used to make some alcoholic drinks such as the liqueur CrÃ¨me de menthe.

It is complicated to combine it with other spices but it gets along with small amount of thyme, sage, marjoram, oregano and parsley.

Often used as a breath freshener.

Mint was originally used as a medicinal herb to treat stomach ache and chest pains. Tea can aid the digestion and could possibly help to clear minor sniffles.

It may reduce lactation in nursing mothers.

In the olden times a mint gel was rubbed onto the forehead and temples to ease headaches.

It was known in Greek Mythology as the "Herb of Hospitality" .

In the Bible, the Pharisees paid their taxes in mint, or anise or cumin.

Even if Hippocrates and Dioscorides mentioned its medicinal benefits, it was first used by the Romans as an aromatic and air freshener.

In Europe, one of its first known uses was also as a room deodoriser and it was scattered across the floor.

Mint is one of the most popular herbs grown in domestic gardens.

Mint was originally from Mediterranean countries.

The name Mint, derived from Minthe, who was a charming nymph in Greek Mythology. She inspired jealousy in Persephone (the wife of Hades), who transformed Minthe into the lowly mint plant.