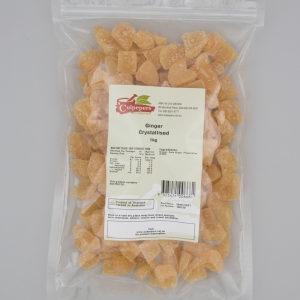 Generally as a snack.

It has a pungent flavour.

Ginger may help prevent nausea, especially when dizzy or suffering from motion sickness.

It may also help with reducing nausea and upset stomachs as a result of morning sickness.

It also may reduce muscle pain from exercise related injury.

5000 years ago the Indian and the Chinese people considered it as a tonic root for all ailments. It was also used as a food preservative in the ancient times.

Ginger is indigenous to Southern China but Europeans first knew it as Jamaican Ginger! It comes from the same family as Turmeric, Galangal and Cardamom. They are all part of the Zingiberaceae family.
Often referred to as candied ginger and actually contains more sugar per serving than most gummy candy.

During the 13th and the 14th centuries a pound of ginger was the same price as a sheep.