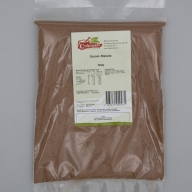 In the dish "Rogan Josh" the spices used is firstly coriander, then ground ginger and then Garam masala and finally chillies. Mostly used in Indian Cuisine.

It has an aroma of black-pepper with some cumin, coriander and turmeric notes. Garam masala is a very versatile blend.

Dependent on the individual ingredients.

The word "Garam" refers to the intensity of the spices rather than the capsaicin (The active component of Chilli Peppers) content.

Country of Origin!
Culpepers' Garam Masala is blended in Australia from Imported Ingredients!