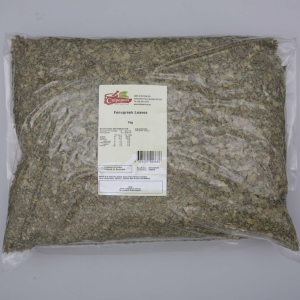 Cook with starchy or root vegetables like carrots, yams or potatoes. It gives a middle eastern flavour to foods. Also used in Indian cuisine. It complements vegetables and fish curries, spinach and pea dishes.

This spice mix well with many spice as well as allspice, chilli, cumin, galangal, turmeric, paprika, pepper and star anise.

Fenugreek leaves or not usually used in spice blends.

It may increase the libido levels in men.
Hippocrates described it as a valuable soothing herb.
It may give benefits to Type 1 and Type 2 Diabetes sufferers.

Fenugreek has been used in cooking for about 6000 years.
It's a member of the pea family and was originally known as "Greek Hay" as it was used as cattle feed.
It is the key ingredient in "Ghormeh Sabzi" (Herb stew) and "Eshkeneh" (Onion Soup) which has often been said to be the national dish of Iran. Could it be because of its reputed medicinal powers?

Fenugreek was used to sweeten the scent of mildewed or sour hay.

This herb is known to be one of the oldest cultivated plant. There is a reference of it in Egyptians medical writings dating from 1000 BCE.