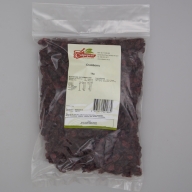 Dried Cranberry's can be used in addition to salads, oatmeal, muesli, muffins, bread products, and trail mix.
Often used to make a sauce that is traditionally served with Turkey during festive seasons.

Dried cranberry's are a great source of antioxidants and can help reduce the reoccurrence of urinary tract infections.

They may decrease inflammation and improve immune system or even prevent the formation of cancers.

May avoid when using a blood-thinning.

Dried Cranberry's are sometimes called "Craisins" the the word "Craisin" is a registered trademark of Ocean Spray Cranberries, and can only be used to describe their product.
Cranberry's were named by white settlers to North America as Crane Berries. They thought the flower and the stem resemble a Crane.
In Canada they are called Mossberrys and in New England USA in the 17 th Century they were even known a Bearberrys as bears were seen eating them.

They are composed of 93% of water when they are not dried.

They were also used as a dye for rugs, clothing and blanket but also as a poultice to draw poison from arrow wounds.