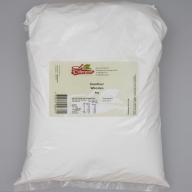 It is a binding agent and is mostly used to thicken gravies, stews and sauces. It has no flavour of its own so it doesn't interfere with the recipe.

It is a key ingredient in making pudding and sponges.

Gluten is Latin for "Glue"!. It is so called as it helps hold food together.

In the USA about 20% of the population target gluten free foods because they perceive it's a healthier eating option. This is a growing trend in Australia too.