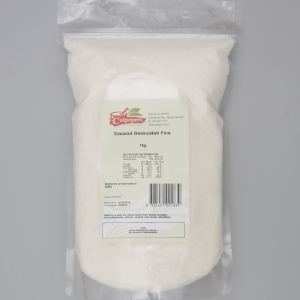 Often used on Lamingtons, in cakes and biscuits, and in curries or even in smoothie. Delicious with chocolate and  in truffle with apricot.

Coconut is one of the top five food allergies in India, but such allergies are considered rare in Australia.

They might help to maintain healthy tissue and fight disease. They are also rich in iron and fibre.

When dried, the coconut flesh is called copra. It takes around 6000 fully grown coconuts to produce 1000 kg of Copra.

A coconut is a fruit (drupe) and not a nut at all.

The novelty song "I've got a lovely bunch of coconuts" was composed by Fred Heatherton in 1944 and was never sung by Monty Python!

Coconuts are also used in cosmetics for skin care.

Culpepers' coconut products come from the Philippines or Indonesia!