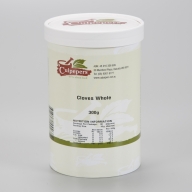 They are best stored whole and ground fresh when required. They are used to add flavour to meat and seafood. They are also popular on cooked fruit desserts. They have a pungent, sweet and spicy flavour.

Cloves may be used as a carminative and as a mild pain killers.

They can also have antiseptic and anesthetic effect.

Cloves were probably the first form of breath freshener. Indeed, during the Han Dynasty, courtiers held cloves in their mouths to sweeten their breath before addressing the emperor.