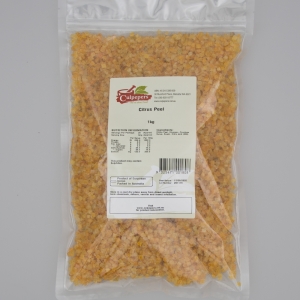 Mostly used in fruit cakes and bread products and in Marmalade. Can be infused to make to or liquor. Delicious when added to meat dishes or to salad dressings with olive oil, thyme and garlic.

The name Marmalade comes from the French "Malade" meaning sick. The legend has it that the madam of the house "Ma" would summon staff to bring her special jam made from Citrus peel. The servants would declare "ma est malade" or "madam is sick" and the name Marmalade was born.

Citrus are in general native to the subtropical and tropical regions of Asia and the Malay Archipelago.

It is also use as an air freshener or as a body scrub.