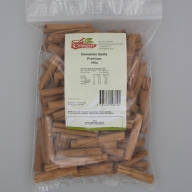 Stored as a "Quill" they are ready for fresh grinding when required.  Used in desserts such as fruits compotes and beverages. Ground Cinnamon is perfect on a cup of hot chocolate!

May assist sufferers of type 2 diabetes.

Has been in culinary use for over 4000 years. Ours aren't that old!
The "Quills" are made by cutting regular lengths of bark from the tree and then curling them into each other.

There is a fable that tells that cinnamon sticks were used by giant birds in the "land of Dionysus" to build their nest on top of precipitous mountains. To collect cinnamon, the courageous traders would leave cut-up carcasses of donkeys near the nest and hide at a safe distance.The birds would swoop down, pick up the carcasses and take them to their aeries. Because the nests were not strong enough to accommodate such weight, they would break and fall to the ground, allowing the hunters to collect the valuable cinnamon sticks and trade them to the West.