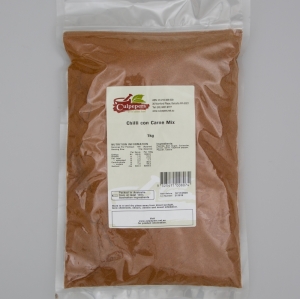 Add to meat and cook as a simmer sauce to properly infuse the meat and make it super tender.

In Australia it is often served with tomatoes and beans. Can be served with corn chips, tortillas, rice, pasta, bread, couscous, potatoes or even on a salad base. This is a very versatile dish and one of the reasons it is soooo popular.

Can be served from a pot in the centre of the table. (This can get messy)

The higher the chilli strength the more you'll sweat. You'll need to read into that for yourself.

The dish has some of its origins in Texas. It is called a Chili dish in the USA and Canada. Chilli Con Carne is an Australian and UK name for this dish.

It was thought that the Spanish brought the idea of seasoned chilli from Spain into Mexico and the southern states of the USA, However the chilli plant originated in South and Central America. This is a migratory food that is now popular with chilli lovers the world over.

It is cooked the same way as you cook a Bolognese.

Hard core chilli loving Texans will you it is illegal to add tomatoes or beans to the meal. They'll also tell you "the hotter the better" and they may not like you if you say you don't like chilli, even when it means there will be more chilli for them. Don't ever judge a Texan chilli lover harshly.

Blended by Culpepers from imported ingredients