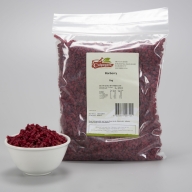 They make an interesting addition to curries.

They have a tangy, lemony currant flavour.

It is high in Vitamin C.
It may be beneficial to sufferers of poly-cystic ovarian syndrome.

Barberry has been used in the treatment of diarrhoea , stomach problem and fever. It might help to treat inflammation.

Many believe that it is an attractive plant to have in the garden. It is however, prohibited in many countries as it attracts wheat rust which can destroy grain crops!

This berry is also used in capsules, tinctures and ointments.

Barberries are used in Iranian dishes to be served at weddings. It is considered  a symbol of the fact that life isn't always a bed of roses. The reason for this thought is their sour taste.