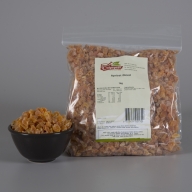 Mostly in baking and in muesli. Can be used in salads to add a sweet flavour.

Apricots have both amygdalin and a modified form named laetrile or Vitamin B17 which have been promoted as cancer cures.

They may protect the eyesight and help against inflammation

Apricots originated in North East China and their cultivation has spread to many countries.

The apricot, prunus armeniaca, is a species of prunus, classified with plums. They are also a member of the rose family.

The 9th of January is the National Apricot Day in the United States of America but there the Apricots are harvested June thru to August.

"Qamar-al-din" is a popular drink consumed during Ramadan and is made from apricot nectar.